I'm a long time Celtics fan living in Florida, so I don't normally get to see them play much during the regular season. I'm relegated to the occasional matchups vs Orlando (my cable provider shows all the Magic games), plus any other games televised nationally on ESPN, NBA TV, or TNT. The rest of you vagabond fans probably face the same challenge. For the 2016-2017 NBA season, I subscribed to NBA League Pass for the first time. It hasn't been pretty.

At the beginning of the season, NBALP costs $199. Is that a fair price? I guess it depends on who you ask. I decided to pay, so there's that. Here's what I typically see when I log in.

I find my game (the Celtics, natch) and click the oval "WATCH" icon. Video is displayed in the big black panel. The first thing I see is an ad. I get shown one, two, sometimes three ads. It doesn't matter what's going on live at the arena: a timeout, halftime, live game action...you have to sit through those commercials no matter what, then you get "connected" to the actual video feed for the game. You read that right. In lieu of live game action, NBALP will show you commercials. Make me pay for the service? Ok, fine. Show me ads too? That's not OK. The NBA is an embarrassment of riches. Pick one: ads or subscription fee. Don't subject me to both.

The web page interface can be confusing. Sometimes it simply made no sense to me, but UI design is subjective. I get that. One example is when they promote the NBALP Free Preview. The first time I encountered that, I clicked on the oval "WATCH" icon as usual (step 1). But instead of seeing the video in the main video panel, I'd see "Enjoy this live game with NBA LEAGUE PASS Free Preview" (step 2). Huh? I clicked the oval "WATCH" icon (next to the oval "LISTEN" icon), but that didn't show me the video feed. If I remember correctly, it navigated me to another NBA TV page that had nothing to do with the game I was wanting to watch. After missing most of the 1st quarter, I realized I had to scroll down and click the "Now Playing" video thumbnail (step 3). Clear as mud, right?

For about the first month, I never knew which broadcast team I'd get. Would it be the preferred Celtics team of Tommy Heinsohn, Tom Gorman and Brian Scalabrine? Or the other team's guys? Right under my nose in the bottom-right of the video panel, next to the speaker/volume icon was the UI control I needed to pick my preferred broadcast. I don't blame NBALP for this--that's my own ignorance. Still, it would have been nice to know. Be forewarned: when you switch the broadcast from Team A to Team B, you have to sit through more ads. Even while live game action is happening. That sucks. And I totally blame NBALP for that.

Video is delivered with Adobe Flash. It's an old technology. Critcs will tell you it's historically buggy and insecure. I tend to agree. Some platforms and browsers don't support it. Flash's history is inglorious at best. NBALP really ought to step up to the present and ditch Flash in favor of HTML5

For the most part, the video feed is consistent and the quality is good. But not always. Occasionally, the video pauses and then restarts on its own. On a MacBook Pro running Chrome, the video would pause at most commercial breaks, as if someone clicked pause on the video controls. Audio for the commercials is sometimes deafening relative to the in-game audio. I missed the first quarter of tonight's game trying to figure out why the video feed was showing as "locked" (see below). There was no other error message or information indicating what the problem was. On a whim, I logged out and logged in. It wasn't until then that I was given any meaningful information as to the nature of the problem. It turns out I needed to update Flash. 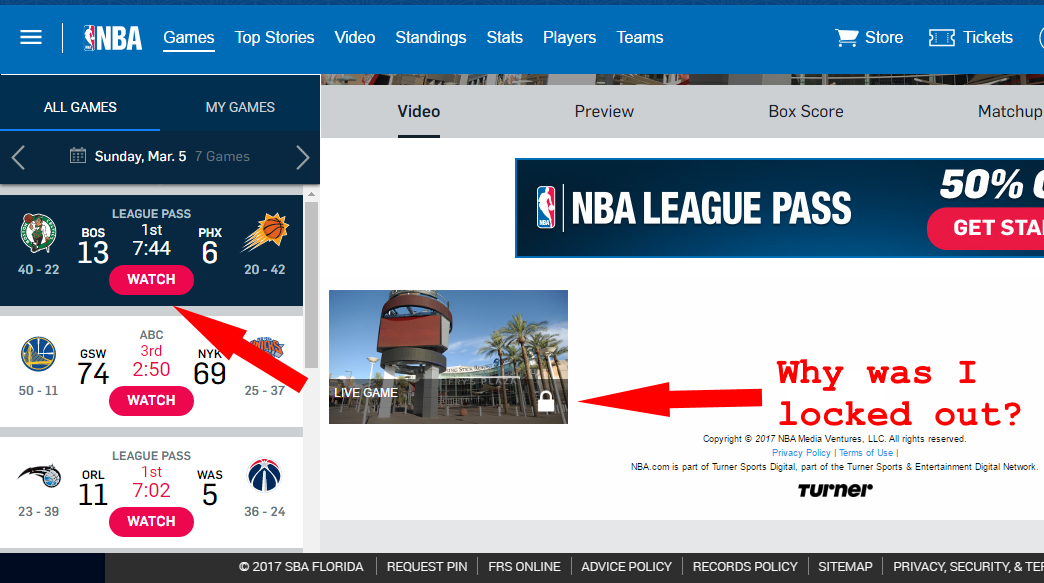 The worst technical issue is that the feeds aren't live. After you click the "WATCH" icon (and watch the mandatory ads) and the feed first begins, you *might* be live. Or close to it. But as real world time elapses, the feed slowly and steadily gets farther and farther behind actual game action. As long as you're not in Full Screen, it's as plain as day. Find the game clock in the main video pane and compare it to what's in the game list on the left. Below are a couple of examples. There's a "LIVE" icon in the video control bar, but it seems to serve no purpose. It doesn't matter if "LIVE" is clicked or not--the video feed never remains live. The white line indicating video progress will continue to creep farther and farther to the left. If you like to engage in social media as you watch the game, this becomes painfully apparent. The rest of the world is sharing and commenting on events that from your perspective haven't happened yet.

Wanna watch NBALP on your Android device? Android doesn't support Flash video, so you won't be doing it via a browser (a good reason to ditch Flash for HTML5, as I alluded to above). There is an Android app you can install. I haven't done that, so I can't tell you if the app is any good or not. Why didn't I install it? Take a look at the access requirements. That is a gross overreach. It's disgusting and indefensible. Access to my Location information? Access to my Photos/Media/Files? Acess to my Wi-Fi connection information? Access to my Device ID & call information? Hell no! Hell no! Hell no! And Hell no! That's my private information. It's none of your damn business. You don't need any of that to show me a basketball game. I can only imagine what nefarious things the NBA might do with my personal information. Install that app if you wish. 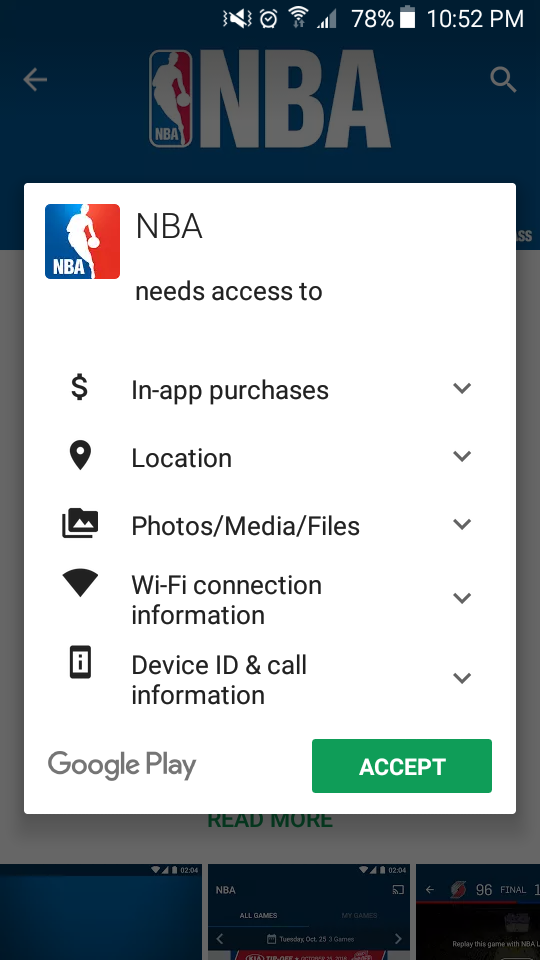 You pay for a full season, but you won't get it. You see, if games are broadcast nationally (eg on ESPN, TNT, or NBA TV), you can't watch it with NBALP. Here's the message you get when you try. 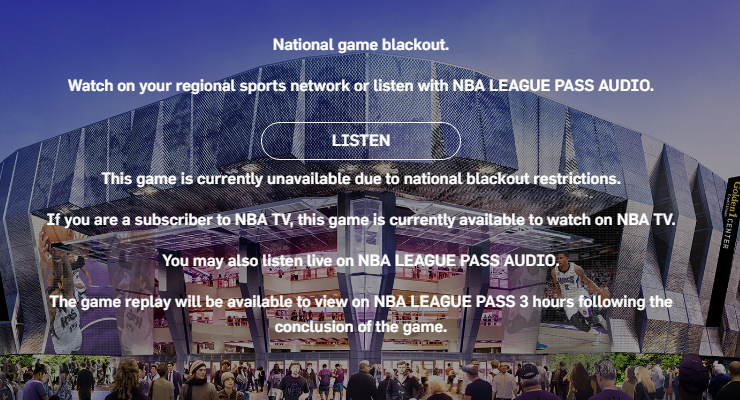 This is a bum deal. Imagine the person that doesn't have a cable subscription at home, or is travelling and cable TV isn't readily available. They're out of luck. I'm sure there are lots of other scenarios where the customer is screwed over by the blackout rule. I paid for 82 games. But I won't get all of them. That's bad business.

It's Not Just Me

Lots of other subscribers have issues and complaints. Some similar to mine, some different. Check out what's being said about NBA League Pass on Twitter. It's brutal! Here's a small sampling.

I hate the thought of not seeing Celtics games next season. Especially after this first year of being able to see most all of them. But the NBALP package has too many problems. It's frustrating, annoying, and at times infuriating. From what I see online, the problems have have been around for far longer than just this season. The NBA doesn't appear to have any interest in addressing them. I'll look for other online options. There's gotta be a better way.