On this date 27 years ago, the Boston Celtics came to Orlando for the first time--well, it was the first time they played against the Orlando Magic on the road. I was a very tiny part of that history. Way back in January of 1990, I was just starting the Spring semester of my third year at UCF. Monday the 15th was Martin Luther King Day, and there were no classes that day.

My friend Joe and I were aspiring (and laughable) body builders. We met on campus and headed straight to "The Dome", a geodesic dome full of archaic workout equipment. It stunk to high hell and wasn't glamorous in the least. It was kind of a dungeon of fitness. But it was a popular place, and Joe and I were regulars there. But on this day, it was closed. Undaunted, we headed over to the Education building, which also housed the basketball gym. (UCF was far from what it is today. There was no on-campus football stadium. We didn't have a fancy basketball gym either. Back then, I think it's capacity was only a few thousand, if that.)

Anyway, there was some old Nautilus-style workout equipment in an enclosed room outside of the gym. We found an external unlocked door and started lifting. Almost immediately, we hear basketballs bouncing and the sound of voices inside. We peer into the gym through the narrow windows in the double doors and to our surprise, we see several Boston Celtics players. I saw Larry Bird and Kevin McHale almost instantly. They were doing drills on the near side of the gym, pretty close to the doors we were standing behind. Robert Parrish was there too, but on the far end of the gym. I barely saw him.

At the time, I lived off-campus. But it wasn't far away. I made Joe promise not to leave, and I raced back to my apartment to get a camera. Now, digital cameras weren't a thing yet in 1990. You needed film. And I was lucky enough to have some on hand. So I grabbed the camera, sped back to campus, and returned to the Education building. Joe was waiting for me. And he had a surprise--one of the doors leading into the gym was open. I take a look in and this is what I see: 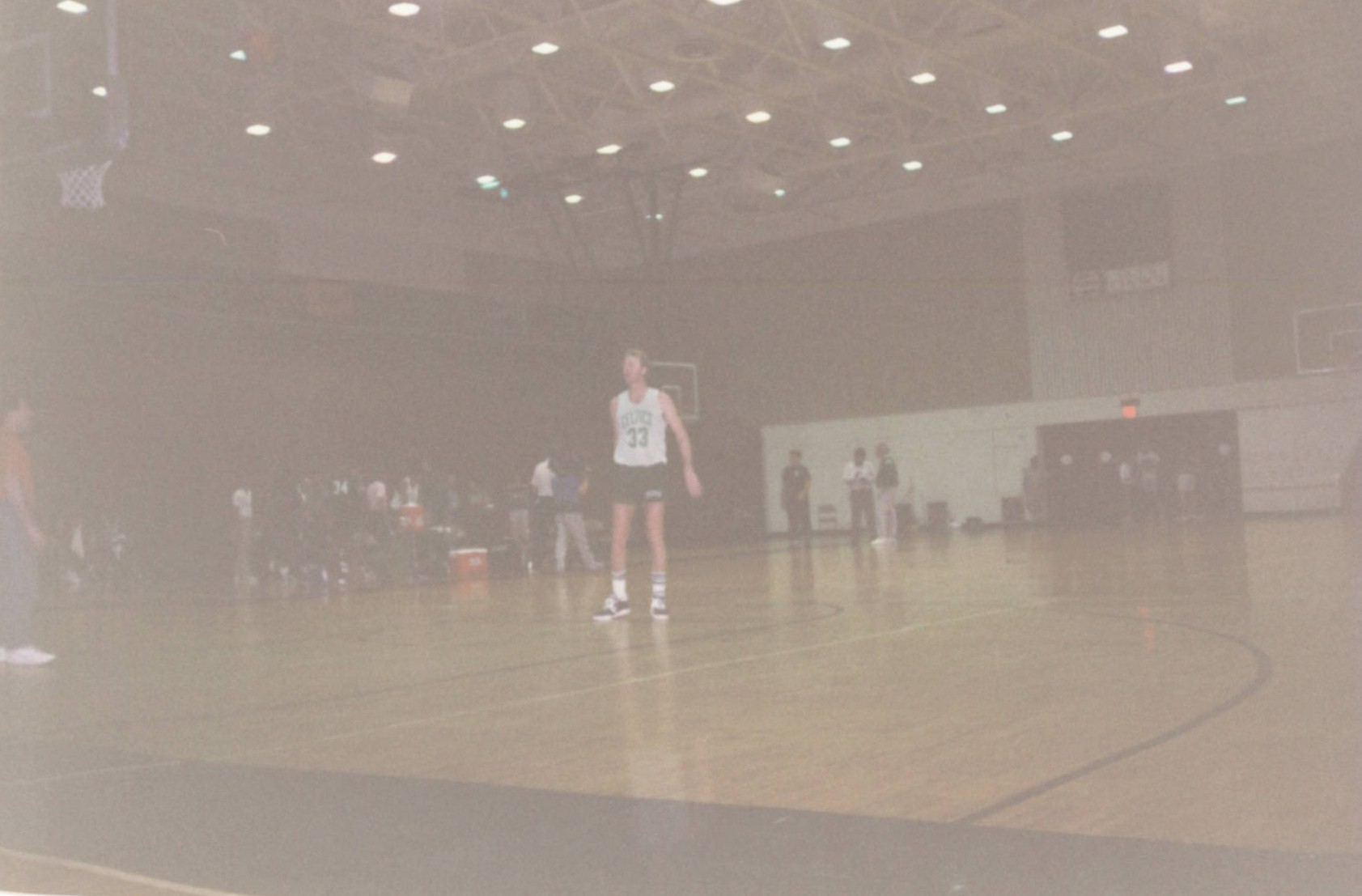 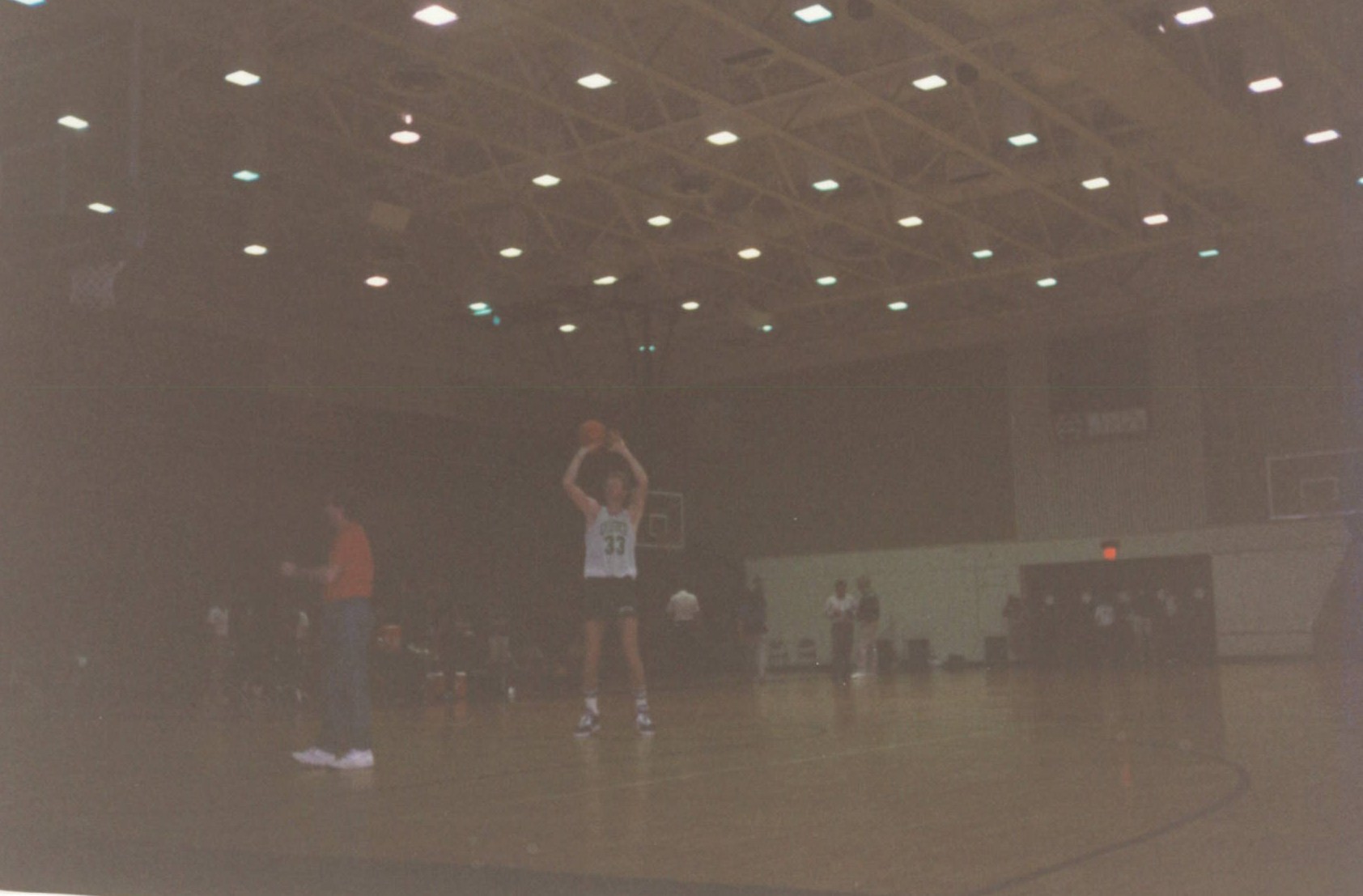 There's Larry working on free throws. He notices Joe and me watching and says something like "You guys can come in if you want to." ZOMG! Hell, yes! We went in and sat quietly by the doors and watched for a while. Larry continued free throws and later did some running drills. (IIRC, he was coming off surgery on his foot/feet that had sidelined him for most of the previous year.) I saw Kevin practice a bunch of post-up moves. He was just going through the motions by himself. But he was hitting everything. No, not literally. But close. I'd bet he hit on close to 90%...seriously. Those pics of Larry shooting free throws are pretty lousy. The ones of Kevin were even worse, unfortunately. (I'll have to try re-scanning them and see if they can be cleaned up in a photo editor.)

Practice wrapped up soon after and then it got a little frenzied. There were already some others in the gym watching from the bleachers. Most were students, but there were some media members there too. Larry was gracious with everyone. We all wanted some of his time. He was patient with everyone. I bet that's really hard to do when you're as well known as he was (and still is). Time's a finite resource, but Larry had some for everyone. Here's a pic of him chatting with a local reporter. I think the local guy brought up a Terry Catledge quote about how the Celtics were vulnerable. Larry's response was "We'll see about that.". Haaa! 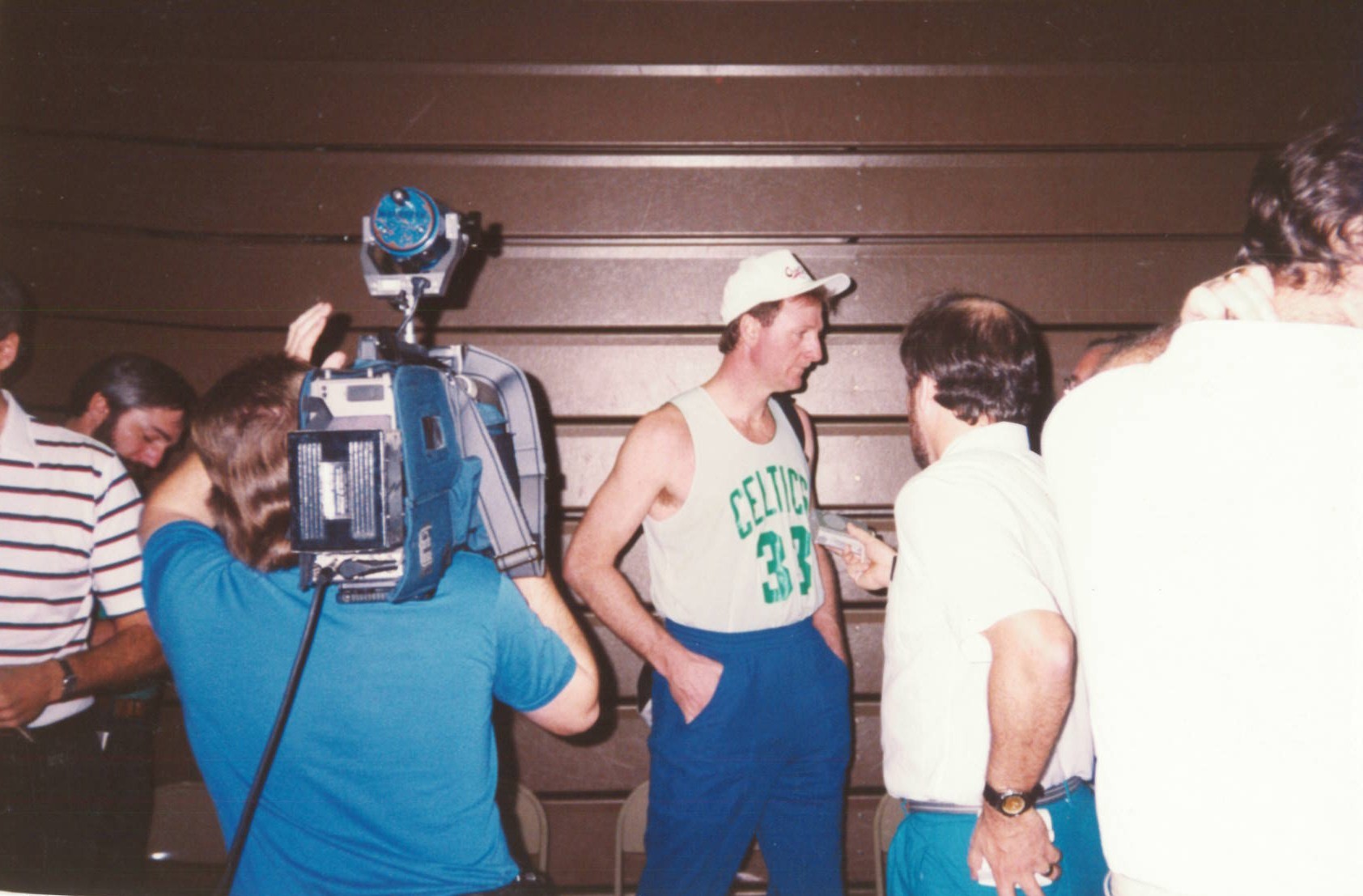 Around this time, most of the other Celtics started filing out of the gym. I got this decent pic of Dennis Johnson. It's one of my favorites. I think that's rookie Michael Smith to the right, with some UCF women's volleyball players in the background to the left. 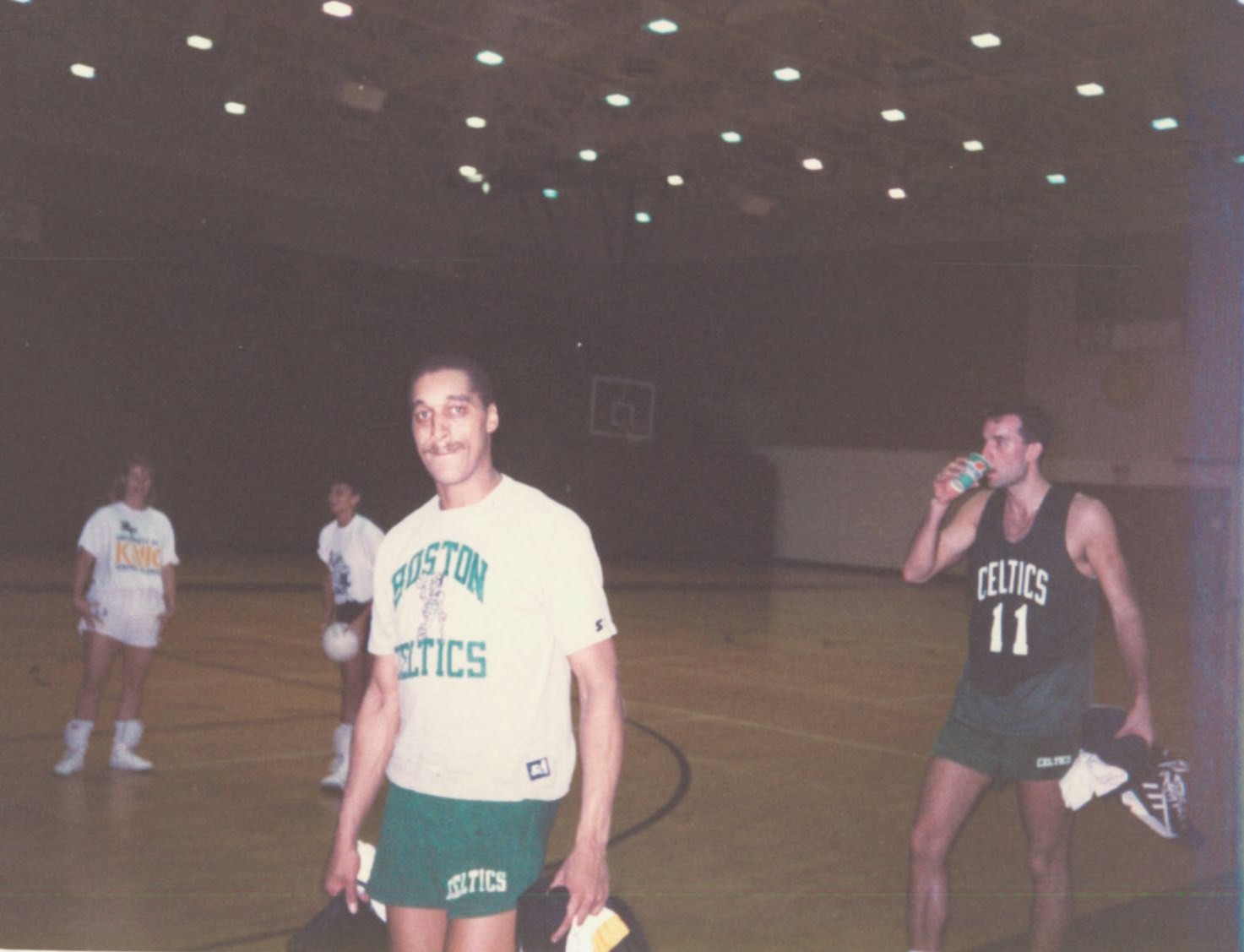 After the media interviews came to a close, Larry still wasn't finished. Everyone wanted a pic with him, including Joe and me. I'm the skinny kid on the left with the hat. If you look close, you can see Larry's messed up pinky on my shoulder. Lucky Joe--he got a one-on-one with The Legend. 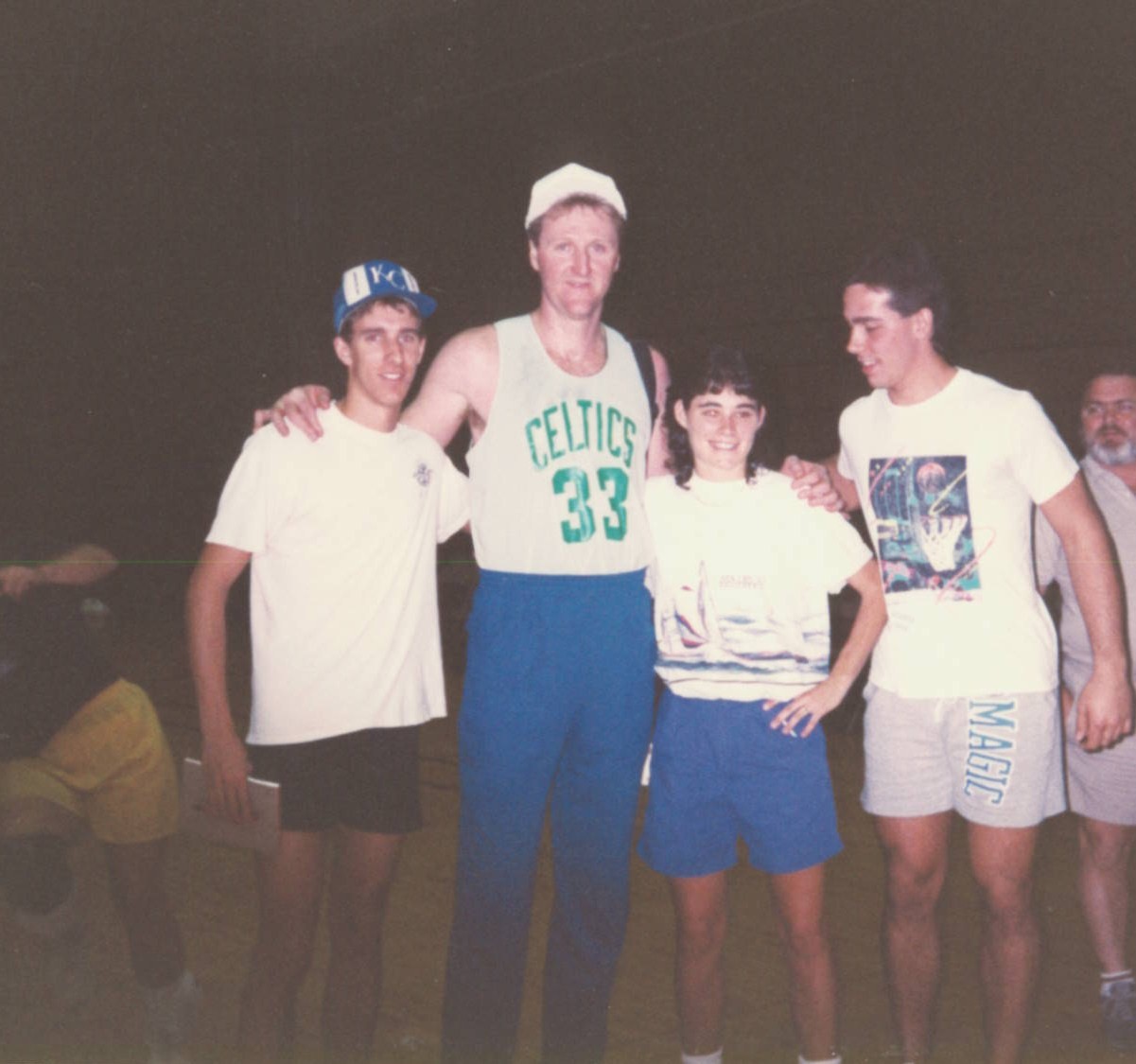 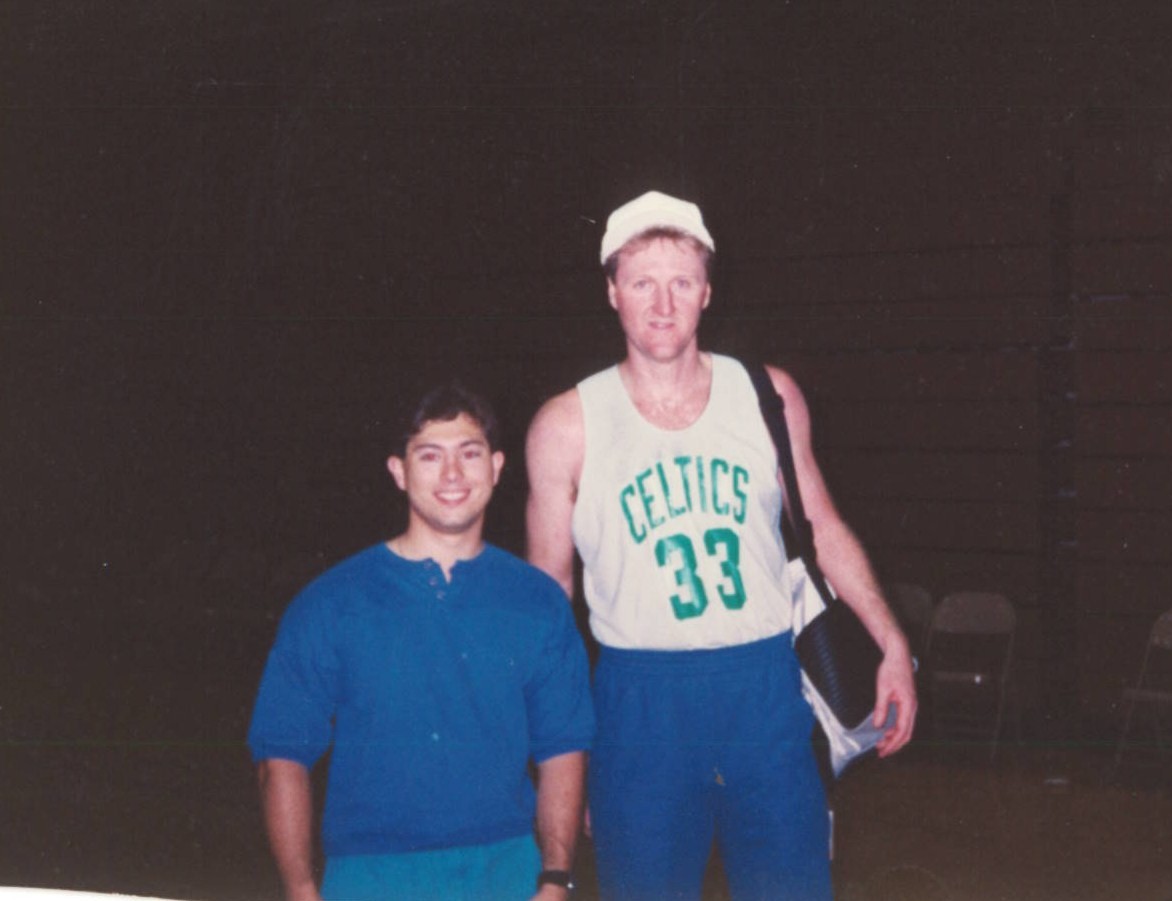 That was the only time I ever met a Celtics player in person, even to this day. I'd love to say "Thanks" personally to Larry. They say he's known for having a great memory. I wonder if he'd remember that January day in 1990 as well as I do.

Two days later on Jan 17th, Orlando hosted Boston for the very first time. I don't remember the game, but Boston came out on top 133-111.