Today, I watched a webinar presented by Karen Lopez (b|t) and Thomas LaRock (b|t). There was an online poll, including the question: "Are you an accidental DBA?" 75% answered yes. Since the name of the webinar was "Advanced Accidental Database Design For SQL Server 2016", that shouldn't have been a shocker. Now I wonder what the real life percentage of DBA's are of the accidental variety. 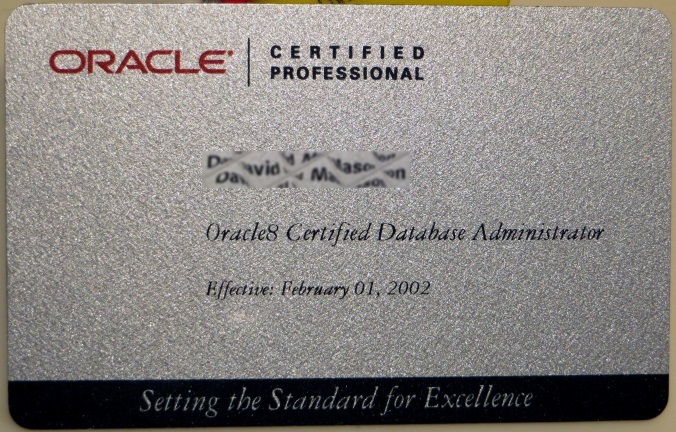 Should I put this on eBay?
"Like new! Never used!"

Thomas quipped that "No one goes to college to be a DBA." That sort of applies to me. I went to college to be a DJ. (Long story...Not very interesting either.) But I had a career change and went back to school to learn programming. I took an Oracle class, started learning SQL, and soon realized my brain was wired for set theory and three-valued logic. I continued to take programming classes, and eventually got a job as a VB6 developer. They hired me because I knew a little bit about Oracle, which was fortunate. I had no idea what I was doing otherwise. But I survived. I learned enough about programming to justify being on the payroll. Soon after, I started down the Oracle certification path. About a year and a half later, I was a card-carrying member of the Oracle 8 Certified DBA club. Then just a couple of months later, my company stopped supporting Oracle for all of their apps. And with a whimper, my Oracle career was over.

I continued on as a developer and made the transition to Visual Studio.Net, like many others did at the time. All the while, I was using SQL Server and learning more and more about it. As the years went by I took on as many "DBA" tasks as I could find. Eventually, I landed my first full-time DBA gig. I still dabble with VS.Net on occasion, but you won't catch me discussing Gang of Four design patterns, or writing lambda expressions.

I've never considered myself an accidental DBA. I'm an intentional DBA. It's what I've wanted to do for a long time. It's what I want to do now. What about you?